“There comes a time when silence is betrayal.” -Dr. Martin Luther King Jr.

Most people have heard of Dr. King’s “I have a Dream” speech. But did you know that he gave a speech stating his opposition to the Vietnam War exactly one year before his assassination? This speech, entitled “Beyond Vietnam, a Time to Break the Silence,” was the most controversial speech of his career. He openly questioned U.S. foreign policy, asking why our country was fighting to “secure rights” for Vietnamese people that the American soldiers were unable to enjoy in their own country. He also criticized the war because it consumed all of the money that the government could have used to improve life for poor Americans. This speech caused Dr. King to lose a significant number of his supporters, including his support from the government. He knew that he would lose popularity; however, as he emphasized in his speech, he could not remain silent. He knew that he could not be an icon of peace and be silent about Vietnam.

Are you willing to stand up for peace? In the words of Dr. King, “Peace is not the absence of war but the presence of justice.” If you stand for peace, you do not stand for injustice, regardless of whether or not it directly affects you. In your daily life, are you standing up for justice? 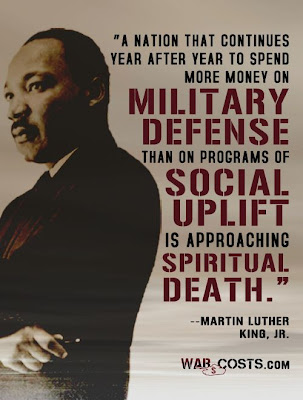 Excerpt from “Beyond Vietnam”

Since I am a preacher by calling, I suppose it is not surprising that I have seven major reasons for bringing Vietnam into the field of my moral vision. There is at the outset a very obvious and almost facile connection between the war in Vietnam and the struggle I and others have been waging in America. A few years ago there was a shining moment in that struggle. It seemed as if there was a real promise of hope for the poor, both black and white, through the poverty program. There were experiments, hopes, new beginnings. Then came the buildup in Vietnam, and I watched this program broken and eviscerated as if it were some idle political plaything on a society gone mad on war. And I knew that America would never invest the necessary funds or energies in rehabilitation of its poor so long as adventures like Vietnam continued to draw men and skills and money like some demonic, destructive suction tube. So I was increasingly compelled to see the war as an enemy of the poor and to attack it as such.

Perhaps a more tragic recognition of reality took place when it became clear to me that the war was doing far more than devastating the hopes of the poor at home. It was sending their sons and their brothers and their husbands to fight and to die in extraordinarily high proportions relative to the rest of the population. We were taking the black young men who had been crippled by our society and sending them eight thousand miles away to guarantee liberties in Southeast Asia which they had not found in southwest Georgia and East Harlem. So we have been repeatedly faced with the cruel irony of watching Negro and white boys on TV screens as they kill and die together for a nation that has been unable to seat them together in the same schools. So we watch them in brutal solidarity burning the huts of a poor village, but we realize that they would hardly live on the same block in Chicago. I could not be silent in the face of such cruel manipulation of the poor.

My third reason moves to an even deeper level of awareness, for it grows out of my experience in the ghettos of the North over the last three years, especially the last three summers. As I have walked among the desperate, rejected, and angry young men, I have told them that Molotov cocktails and rifles would not solve their problems. I have tried to offer them my deepest compassion while maintaining my conviction that social change comes most meaningfully through nonviolent action. But they asked, and rightly so, “What about Vietnam?” They asked if our own nation wasn’t using massive doses of violence to solve its problems, to bring about the changes it wanted. Their questions hit home, and I knew that I could never again raise my voice against the violence of the oppressed in the ghettos without having first spoken clearly to the greatest purveyor of violence in the world today: my own government. For the sake of those boys, for the sake of this government, for the sake of the hundreds of thousands trembling under our violence, I cannot be silent.

View all posts by ucmadmin

This site uses Akismet to reduce spam. Learn how your comment data is processed.